What is a 3rd Cousin? Does it matter in genealogy? Today, many people get started in genealogy by taking a DNA test from a company like AncestryDNA, MyHeritageDNA, or FamilyTreeDNA.

Suddenly you have this list of cousins (your match list) and a whole lot of questions. In particular, people get confused about what is a 3rd cousin (or a 2nd cousin, a first cousin once removed, etc.). Don't worry! It's not that complicated and it may or may not matter to your situation. 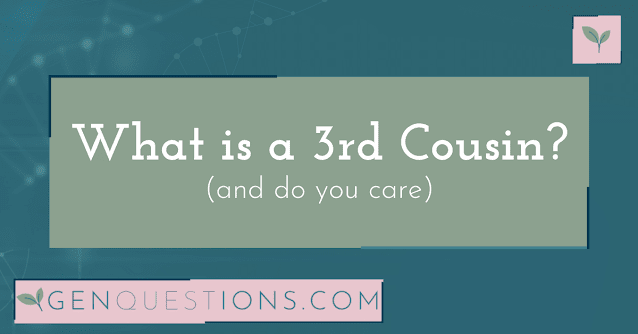 How to determine the type of cousin relationship

Cousin relationships are defined by who the shared ancestor is between the two cousins. Normally when we talk about "our cousins," we mean first cousins (1st cousins). You and your first cousin share a set of grandparents. If you only share one grandparent you are half first cousins. You can probably remember this and that makes it easy to figure out what other types of cousins are.

(So, there's a "math" trick to calculate distant cousins without listing them all out like above---the number of cousinship is one more than how many "greats" for the grandparent---I personally never remember this and simply know my 1st cousins share grandparents (1-1=0 so no great), so 2nd cousins share great-grandparents (2-1=1 so 1 great). Then I remember this little math trick and can jump to say an 8th cousin, 8-1=7 so they share one set of 7th great grandparents).

Why do you need to know what a third cousin is?

So when do you need to know what a 3rd cousin is?

Basically, knowing what a 3rd cousin is makes a big difference when doing genetic genealogy (using DNA for family history research) but isn't a big deal if you are just trying to build a traditional family tree. You can do traditional genealogy without knowing how to define types of cousins.

In normal conversations, even genealogists often refer to cousins as anyone who's most recent common ancestor are grandparents or more distant relatives.

I bet if you head to an average family reunion (not a gathering of genealogists) most people won't know what kind of cousin anyone is and they might even get it wrong, which brings me to...

What about "removed" cousins?

Most people don't understand and even misuse "removed" when talking about cousins. Remember, a cousin is someone where the closest shared relative is a grandparent.

If the closest shared relationship is a parent you are siblings or it is an avuncular relationship---which is the term for aunt/uncle/niece/nephew.

People think "removed" means a more distant relative but it means the difference in the number of generations to the shared ancestor. Remember, any cousin relationship means the closest shared ancestor is at least a grandparent.

So a first cousin once removed means the closer shared relationship is a grandparent (the "first cousin" part). The other person shares one additional generation (the "once removed" part). That is a great-grandparent.

For genealogy, there are cousin charts to make sure you get these relationships correct.

If you are working with DNA it is very important to get the exact cousin relationship right. How much DNA you share with blood relatives is how you use DNA to build your family tree. You can't identify new ancestors if you don't get the specific ancestors shared between you and DNA matches correct.

When you are talking about more distant relationships, 5th cousins, second cousins twice removed, etc., being a generation off can seriously complicate your DNA analysis. Sometimes you are more than one generation off and that is much worse.

Correctly identifying the type of cousins of your DNA matches is how you use DNA testing for genealogy.

I found a DNA match to me that is a third cousin. We share 36cM which is a really small amount of DNA for a 3rd cousin. I'm really interested in using DNA to expand the branch we share. I want as much shared DNA between us as possible to increase the chances I can use DNA for this genealogy project.

I didn't find the match's father but I don't have to stay in my direct line as long as I'm confident with the close family who's tests I'm using.

My grandfather's sister was tested and she shares that branch with me. The relationship from her to my third cousin is a 1C2r (1st cousin twice removed) and they share 122cM. That's a lot less than you'd expect to be shared for that relationship but it's a lot better than 36cM!

This closer relationship did help me discover something, it looks like we inherited less DNA from this branch which is probably whey I'm struggling using DNA to expand it! I should try and find as many "closer" relatives who have tested to work with as possible. Maybe some of them inherited more DNA from the couple I'm interested in.

So what is a third cousin?

Third cousins are two people who's shared ancestor is their great-great grandparents.

Why do you care if someone is your third cousin?

Mostly you don't, unless you're doing genetic genealogy, then it's really important.

If you're ready to learn more about working with amounts of shared DNA, checkout this post on my sister blog, The Occasional Genealogist.

Popular posts from this blog

Free Genealogy: How to Get Started

Starting your family history is completely free and can be done anytime, and really, anywhere. If you're curious where your family came from, you don't need a computer or an expensive subscription to get started. In fact, it appears this might actually be causing an unrecognized problem for today's new genealogists. Yes, you read that right. Starting with a computer/online subscription might actually be causing you a problem. Start with what you know I just had a great email from a newsletter reader who teaches genealogy classes in Australia. She told me she has her students make their ancestors come alive by requiring they add additional details to the research. But that's not what relates to starting your family history. She also said most don't have details on themselves beyond their own birth and marriage... WHAT! This made me think way back to when I was literally starting. Not what I did early on but really just starting. It involve
Post a Comment
Read more